A couple of weeks ago I made a final visit to the house where I grew up. My dad had decided to sell and I had to pick up a few remaining bits and pieces.

Though I was actually born in hospital, I spent my years from zero to 20 living in that 1950’s semi-detached. In a small cul-de-sac alongside the former A1 — the main London to Edinburgh road — and just a couple of miles from Newcastle city centre.

The surrounding area has become horribly built-up now but thirty-five years ago, to us kids, it felt almost like living out in the countryside. School was at the top of the street and we would sit in class looking out across open farmland. Sometimes we would see deer and kestrels. Now it is a housing estate.

A small lane comes off the old A1 next to a hotel. It runs alongside a stream and behind the houses at the end of the street. When I was a kid, once the lane had passed the street, there were allotments on the other side of the stream to the left. Further on there was an open field to the right which, in my memory of it, is ploughed.

To the left there was a large tree (again on the other side of the stream) with a rope swing hanging down and another open field beyond it. The lane was a dead-end and came to a stop next to a small single-storey building which stood quite alone, surrounded on three sides by the ploughed field. 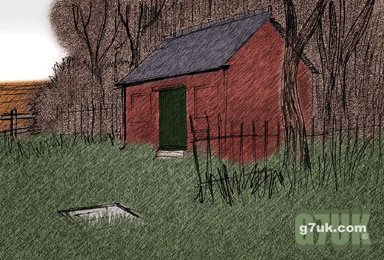 This red-brick windowless building seemed to date from the 1920’s or ’30’s. It had one or two solid wooden doors that were painted in corporation dark green. I’ve drawn the picture above from memory and I’m hazy on some of the details. The brickwork was a little more ornate than I’ve shown and the building was longer. It was surrounded by overgrown bushes, tall trees and a twisted, rusting metal fence.

Mum and dad moved into their house in 1960. It wasn’t long before they noticed that, now and again, during the day and in the middle of the night, a vehicle would pass along the lane. What on earth was going on? Why would anyone drive along there? It was a dead-end. My mum asked some of the neighbours…

It turned out the building was a mortuary and the vehicles were ambulances or hearses. In the days before hospitals had the efficient cold storage facilities that they do now, unfortunate road accident fatalities and other victims of sudden death would be taken down the lane and left in the red-brick building until they could be dealt with properly.

Of course this didn’t stop us going to play around there and, by the end of the 1960’s, I’m certain the building wasn’t used anymore.

Looking back, its hard to know how much was in our minds and what was fact but, the end of the lane and the sinister little ‘house’ always felt eerie to me. It seemed that birds didn’t sing there. There was a large manhole cover, with the sound of water whooshing underneath and the twisted fence and lanky trees with nesting rooks just added to the ghastly effect.

When I visited a few weeks ago, dad took me over to his allotment, but we also walked along to the end of the lane. It was the first time I’d been down there for at least twenty-five years.

Now the fields have houses on them. Though from what I could figure out they haven’t dared put a house on the spot where the red-brick building stood. There’s an open area.

But, let’s go back sixty years for a moment. Imagine you are an ambulance driver before even those 1950’s houses were built… It’s a stormy wet night, there’s thunder and lightning and there has been a terrible traffic accident.

You turn off the A1 road, drive down the bumpy unlit lane full of potholes, until you are surrounded by nothing but fields. You pull up at the building. Maybe there are bodies already in there. It must have been creepy in the extreme…