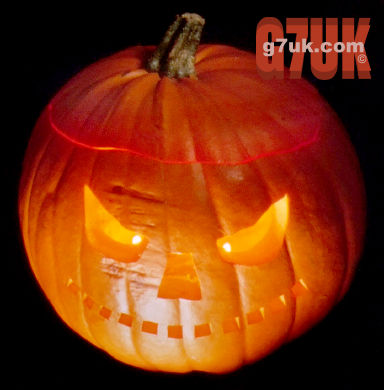 Just over one hundred years ago the Manchester College of Technology had a lovely new building on the corner of Whitworth Street and Sackville Street. It had been built in 1898 as this photo shows.

The College wanted to expand but there was a slight problem. Next door was St. Augustine’s Chapel. It had been there since 1820 and it had a churchyard at the rear. 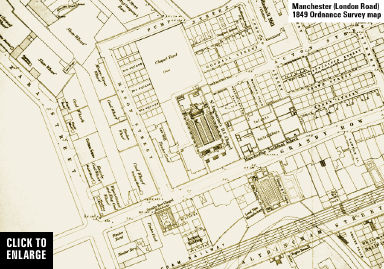 As any native Mancunian will tell you, nothing — whether alive or dead — is ever allowed to stand in the way of the expansion of Manchester’s universities. So, the Chapel was demolished, all the poor souls who were buried at St.Augustine’s were dug up and the crypts were emptied.

In those days there were no archaeologists from Time Team, sensitively brushing away the soil to investigate who lay there. Just some lads with shovels, buckets and wheelbarrows. The worked was photographed: photo 1, photo 2 (dated 20 September 1909, just over one hundred years ago).

However 187 gravestones (c 1821-1860) were transcribed by the City Surveyor and a plan was drawn. The remains were moved to Moston Cemetery.

By 1910 the site had been cleared and looked like this (the camera is pointing south from about where Whitworth Street is now.).

With the money it received from the sale, in 1908 the Catholic Church built a second St. Augustine’s on York Street. But just 32 years later it was bombed and destroyed in the Manchester Blitz of Christmas 1940 and Father George Street was killed.

The ruin was painted by L.S. Lowry and the painting hangs in the City Art Gallery. The church stood just behind where the National Computing Centre is on Oxford Road today.

Due to the great depression in the 1930’s and then the Second World War, work on the University extension wasn’t completed until 1957.

So none of the people who were buried at the original St.Augustine’s had been resting there for any longer than 88 years and some for just 49 years. I wonder whether some of those spirits might still be around Granby Row? If I’d been disturbed like that I reckon I’d be haunting a few students and lecture rooms! 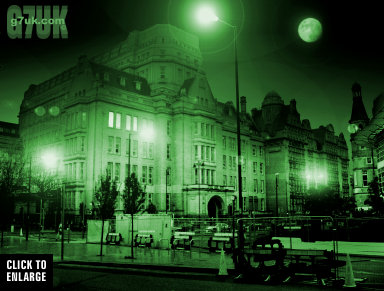 In fact, this was just one of a number of similar operations that the City Council embarked on around this time, as it sought to widen roads, demolish old churches and redevelop sites.

It has happened in more modern times too. In January 1996 when the Cross Street Unitarian Chapel was rebuilt and, controversially in 2003, when 20,000 bodies were removed from the Wesleyan Methodist Cemetery in Cheetham Hill to make way for a Tesco supermarket: link 1 | link 2. That had only been closed for burials in 1966 and, according to the BBC, some of those remains ended up on a public tip at Oldham.

The Deputy Leader of Manchester City Council told the BBC that the records from the Wesleyan Methodist Cemetery were: “completely indecipherable – we have not been able to read them to identify who is in the graveyard.” Yet the National Archives show that in fact the Council had “transcripts of 5112 gravestones, c 1832-1961 with accompanying plan” dating from 1980.