Mother’s Day is next Sunday, 26 March. But, according to the British charity Save the Children, nine million African children have lost their mum to AIDS…

So many soldiers are absconding from the British Army due to the war in Iraq that the Government is planning to change the definition of ‘desertion’.

Under The Armed Forces Bill, which is currently going through Parliament, ‘soldiers could now face life imprisonment if they refuse to take part in the occupation of a foreign country’.

As usual with Tony Blair, the answer is not to tackle the root of the problem — which is that he lied, the invasion of Iraq was illegal under international law and has been a total disaster. Not to mention that moral has been low because soldiers have sometimes lacked essential equipment such as body armour.

No, instead, Blair punishes the soldiers. Like so many other people, they see through him and have no faith in his leadship. So the only way to stop them running away is to theaten them with life in jail!

If I was in the armed forces I would be looking to get out as soon as possible, one way or another.

This is the twenty-first century and, when a soldier is being asked to put his or her life on the line, they should be confident that it is for a cause that is just and legal (and not just inside Tony Blair’s twisted head).

POST-WAR PROFITEERING BY US COMPANIES IN IRAQ

BBC Newsnight has a must-see report on how billions of dollars of Iraq’s money was directed to American companies to rebuild the country and much of it is now unaccounted for. Download it here while you can.

We went for a meal at our current favourite place on Wilmslow Road in Rusholme, Manchester. An area that is known as ‘the curry mile’. 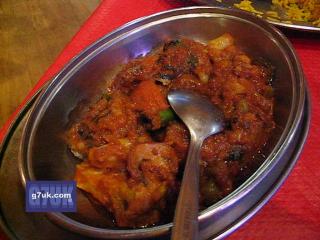 Update: (10 Jan 2007) sadly our last couple of visits haven’t been up to the same standard. So we’re trying some others.

The justice system in Britain is messed up.

Last year three teenagers (currently aged 17-18) beat a man to death because he refused to give them a light for a cigarette:

One of the youths then smashed a metal peg from a BMX bike into his face, knocking him to the ground. As his friends ran to help him, the gang kicked and stamped on the kitchen fitter as he lay on the ground.

Mr Sutherman, who had four sons and was originally from Singapore, was taken to Royal Oldham Hospital but later died from a head injury.’

All three admitted manslaughter. One has been sentenced to six years, one to four years and one got nine months! Bear in mind they will probably serve only half their sentences.

Meanwhile, a bank cashier who helped conmen steal £279,000 from comedian Harry Hill has been convicted of conspiracy and sentenced to four years in prison!

Her defence counsel said she had never received, been offered, or asked for any financial reward for her actions and that she did it because the gang threatened her family.

So here we see what is looked on as being really important in Britain today — money, not a human life. I feel so sorry for that man’s family.

The shop from the BBC comedy series Open All Hours could be demolished to make way for new developments in Doncaster.

They must be mad! How many tourist attractions does Doncaster have?

The Guardian reports that British Rail patented plans for a nuclear-powered flying saucer in 1973.

‘Charles Osmond Frederick, patented the design for a craft powered by laser-controlled thermonuclear fusion. Designed to reach high speeds in space, it was meant to move us around the globe and even to other planets.

Its “lifting platform” was designed for the British Railways Board and the patent was filed under the name of Jensen and Son.’

A bizarre and rather funny story. 1970’s British Rail staff being in charge of nuclear-powered vehicles just doesn’t bear thinking about. Although it could have made their limp sandwiches a bit more crispy!

A friend had to make a dash for home. Throwing our shopping plans into total confusion.

I went to the doctors. About six weeks ago I spotted a large lump to the side of my big toe. I was concerned it was a bunion. Anyway, it turns out it is just a bursa — a sac of fluid probably caused by my shoe rubbing — and it will probably clear up by itself.

I’m noticing a lot of aches and pains this winter, especially since the weather turned really cold over the past month. My knees don’t seem to have the same bounce that they used to.

I hate the cold, damp British winters and getting older too. Then again, even my Ghanian friend ‘K’ is suffering pains in his feet and he’s fifteen years my junior.

There’s nothing else for it… I’m just going to have to move to a warmer climate. Send your donations!