Today I received some official figures for Manchester Pride 2004 via my Member of Parliament. They appear to show that only about 34.5% of Operation Fundraiser ticket money from the event went to good causes. The rest was spent on costs. So far I have been unable to get figures for collection bucket money. I don’t know where that is included.

From the figures that I have seen for the years 2003 and 2004, and the information I have now received from Manchester Pride, that statement from Operation Fundraiser appears to be untrue. I don’t see how they can say 50%.

If you’re wondering why I had to involve my MP. The answer is because Operation Fundraiser will not give me information.

In 2004, Operation Fundraiser collected £331,192 from ticket sales at Manchester Pride. They handed over 50% of that money to Manchester Pride to cover the cost of running the event. Leaving £165,596. 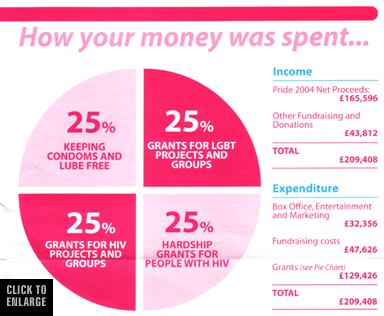 Operation Fundraiser’s ‘Annual Report’ leaflet, which they distributed last August, was misleading. In it they add together the £165,596 ‘net proceeds’ Pride figure and a £43,812 figure (for other non-pride fundraising and donations). Giving a ‘total income’ of £209,408.

I don’t know where collection bucket money is in all of this.

In the Operation Fundraiser ‘Annual Report’ 2004 leaflet, they don’t mention the £165,596 that was handed over to Manchester Pride. By doing so, they give the public a false impression of what percentage of income goes to good causes. They make the situation appear much better than it really is.

Which leaves a final figure for good causes in 2004 that is just £1,736 more than the previous year. Quite a coincidence… Sometimes it feels as if there is a ‘glass ceiling’ on the amount that is allowed to go to good causes each year.