UPDATE (October 2008): this video has ‘retired’ into the archives. I’ve left the production notes below.

It was Marie Antoinette who supposedly said ‘let them eat cake.’ We found that Sainsburys in Manchester takes a different line… 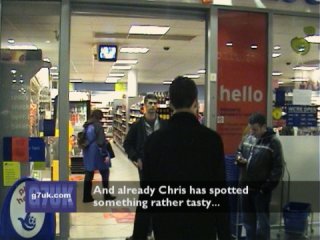 Bargain Hunters is our reality shopping programme. Can we get some good last-minute deals at the local grocery stores? It’s a race against the clock!

Amusing to see the two signs as Chris walks into the second shop: ‘hello’ and ‘play here’. I think you’ll get me when you watch the video… We were both suffering when we made this one. I had a cold and could hardly speak and Chris had just given up smoking.

Chris and I have been going shopping together for a long time now. It’s always a laugh and, recently, we decided to see if the fun would come across on video. Making the videos has added a whole new aspect to it for us.

We’re very genuine and honest about the whole experience, though we wouldn’t want anyone to think we take it too seriously. Being alpha-males, I guess we both enjoy the thrill of the chase ;-D

Oh and Chris doesn’t want you to think he is a cheapskate who lives entirely on 50p bargains!

I’ve known Chris since 2001, when he was 18 and moved in next door to me. We’ve been friends ever since, though he no longer lives next door. Yes I’m old enough to be his dad — and I’m sure we’re both glad I’m not!

He keeps me up-to-date with the things that twenty-somethings are interested in and sometimes I can help him because I’ve had a bit more experience of life. Plus we have some cross-over in interests.

It can be tough being young and gay and I believe that older men have a responsibility to help the younger ones stay out of trouble. And, for the cynical people out there, often there is no sexual side to these friendships.

When I was with my partner of almost nine years, and both aged in our 20’s, one of our friends, Richard, was in his 60’s. We used to visit him every Sunday. We valued his friendship and I’m sure he felt the same. He had some marvellous stories to tell, like the one about him being allowed to take home a German prisoner of war for Christmas!

Down the years there were probably always these old ‘aunties’ who took younger men under their wing. I hope it continues today, though I’m not confident it does so much. I see a lot of ageism now: guys who won’t talk to any gay man who is over 30. They are missing out…

Maybe this is another sign of the breakdown of the gay community, which seems to have happened over the last 15 years. I’ll be returning to this subject soon…

It was a tradition for these old aunties to give you a ‘camp’ name. Which was a hark-back to the days when gay men referred to each other using female names. Like Polari, the ‘gay language’ of the 1950’s and 1960’s, camp names allowed gay men to talk about each other openly in public without raising suspicion: ‘did you hear what happened to Myrtle? She was seeing this guy…’ etc.

This was not connected with how effeminate the men were. Often, even the roughest, toughest gay man would have a camp name and probably would answer to it! Which all added to the fun, as you would see some tattooed ex-convict called Terence, with a face like a pitt-bull, answering to the name ‘Tess’. As Oscar Wilde said: ‘the only thing worse than being talked about is not being talked about’…

My camp name was Linda and my partner’s was Angie. I was named after Linda Lewis — a woman journalist on BBC North-West Tonight — and my partner after Angie Watts from Eastenders!

Actually, Chris has a camp name: Marigold, which came about because he helped someone clean his house and he wore rubber gloves to do it: ‘Marigold’ brand.