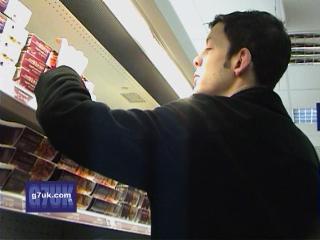 UPDATE (October 2008): this video has ‘retired’ into the archives. I’ve left the production notes below.

Bargain Hunters is our reality shopping programme. Can we get some good last-minute deals at the local grocery stores? It’s a race against the clock!

This one was filmed at Easter but I only just got it edited. I think it turned out great — especially considering we had a few issues.

Five minutes into filming it started to rain (April was just SO wet here). Rain has to be extremely heavy to show up much on screen, but even light drizzle isn’t too good for the camcorder. Then my voice recorder seemed to stop working, so we abandoned one thing we had planned (it turned out later I had hit a ‘helpful’ switch which prevents recording and which I’d forgotten was there).

As usual, here are my thoughts on this episode and some of the ideas behind it…

I’m going to scream if I see another lazy PR person, estate agent or journalist refer to ‘vibrant Manchester city centre‘. It’s become a cliche and we need an organised campaign to take the piss out of the unimaginative people who do it. Even churches and the Arndale Centre (with its tacky new catchphrase ‘come together’) are ‘vibrant’ supposedly.

Big Brother starts here this coming Thursday. It was, of course, Big Brother contestant Michelle who famously offered Stuart the chance to squeeze her ‘baps’. As usual I expect to watch the start of the 13 weeks, get bored and stop tuning in, and then return for the last few days to see how it ends.

One of the things I love about editing video is the way all the different elements — picture, live sound and music — sometimes combine to create something unexpected. As I filmed Chris in the lift, in the background there was the sound of a rather emotional woman talking in a loud voice. During editing, when I added the music, I found it became almost like some weird operatic version of our regular theme music. Bizarre.

Chris makes me laugh an awful lot, with his enthusiasm and that slightly-eccentric British thing he has going on. Like a Kenneth Williams or Frankie Howerd, he can make the most innocent remark sound suggestive.

Memo to self: remember not to film broccoli or salad in front of a green screen.