Perhaps you thought you’d seen every half-baked, damaging, badly-thought out planning decision that Manchester City Council could come up with or approve for the gay village area?

It allowed ugly modern buildings to go up next to Victorian warehouses on Canal Street, replaced the cast-iron bridge with a concrete one, gave the go ahead for a giant skyscraper that would overshadow the whole street and granted endless licences for bars. It allowed the gay village, which was once a safe space, to become a binge-drinking hellhole where people get murdered.

Well, if you thought you’d seen it all, think again, because the latest lunatic proposal will make you gasp… 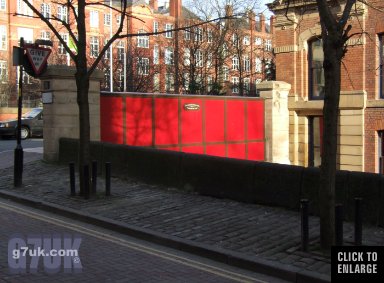 In the background, the cast-iron bridge on Sackville Street that was replaced with concrete in 2007. In the foreground the wall along Canal Street.

The City Council has proposed that a stainless steel and glass ‘safety fence’ should be built right along Canal Street, from Minshull Street (where the Courts are) to Princess Street. It will stand in front of and above the existing wall. You can see the design here (PDF).

It comes after a man died after falling and slipping into the water in March 2008, while trying to rescue his 24-year-old stepson.

Though this incident is extremely sad, accidents are a fact of life. The wall has been there for 200 years and is an essential part of the character and history of the street.

But in a typical modern-day over-the-top reaction, the Manchester coroner ‘urged town hall chiefs to act’.

While it’s unclear whether alcohol was involved in this particular accident, it did occur at 2.25am in the morning. No doubt the city council is now concerned about being seen to act, hence this total madness.

In the local press, rent-a-quote councillor Pat Karney suggested that a ‘wall or netting’ might have to be put up and it might be necessary to ‘change the character of the village’.

Interestingly, some of the stories in the press fail to mention both the age of the stepson and the time of the incident.

The truth is, Manchester City Council will do ANYTHING other than tackle the real problem, which is binge drinking and anti-social behaviour in the gay village. Of course, reducing alcohol consumption would hit the profits of the big businesses that control most of the bars.

So, once again, this minority of troublesome, but highly profitable, people are allowed to destroy the city centre for everyone else.

Consultation on this proposal ends on 19th June, though Officers will still take comments received later than that to the Highways Committee on 25th June.

The application reference number is 089880. Put that number in the top box on the page and click ‘search’ at the bottom of the form to open the application. Hit ‘click to view’ and then click the button marked ‘submit comments’. You may need to tick the ‘I live outside the area’ box whether you do or not.

* A photo of Canal Street Police Station in 1906 – the ugly ‘Spirit’ and ‘Manto’ bars stand on this spot now.