On 30 April, just four days after I wrote about the Basement Social Centre in Manchester city centre and said what a unique and absolutely spiffing place it was, a huge fire ripped through a building to the rear of it. Burning embers were carried in the wind, setting light to other historic Victorian properties along Lever Street. Sprinkler systems were set off, causing water damage in some places.

The building ajoining the Basement was left in such a dangerous state that no one was allowed near until part of it had been demolished.

The consequences for small businesses, groups and individuals in the area will continue for months to come. Many survive on a shoestring in this part of town where rents tend to be low. In the case of the Basement Social Centre, it is a collective of volunteers which relies on donations and the income from its vegan cafe. Now it faces being closed for several weeks for a big clean up operation.

A fundraising event to help people in the area get back on their feet will happen in Stevenson Square at the end of May and any other offers of assistance will be greatfully received.

A few hours after the fire, I shot this video interview with one of the people who is connected with the Basement. The mainstream media quickly latched onto the idea that homeless individuals had probably caused the fire. But other people question how likely that is.

This was the scene on 2 May when I walked around to take a look: 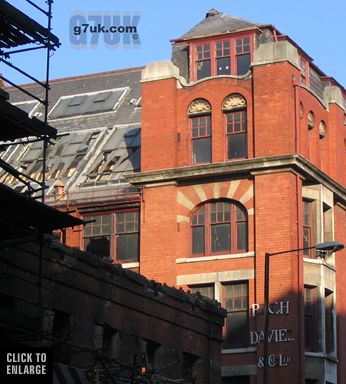 In shadow in the foreground is the half demolished building where the main fire was. The skylights and sign on the building next to it have been damaged by the blaze. 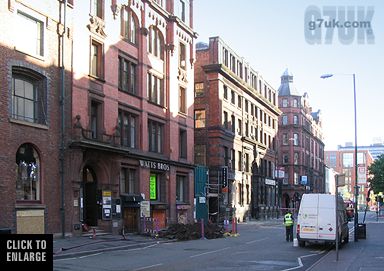 Lever Street. The fire was in a building behind the one that is in the centre left of this shot. 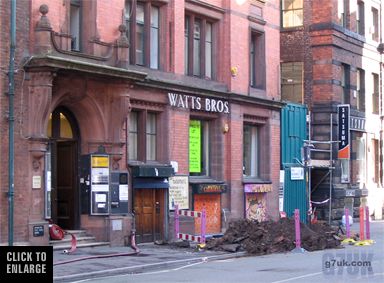 The Basement Social Centre. Conditions were highly dangerous. It was felt that the building that had been on fire might collapse. But also, there were problems disconnecting gas and electricity (not good for the fire fighters with so much water around). In the end, a hole was dug in the street. 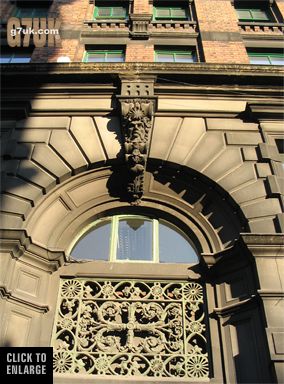 The front doorway of the building next the Basement Social Centre on Lever Street. Initially we thought it was this that had been on fire and were concerned that the magnificent doorway would be demolished. In fact the fire was in a building to the rear of this one and round the corner. 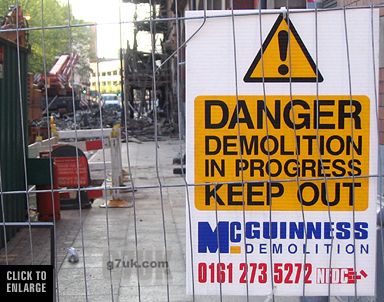 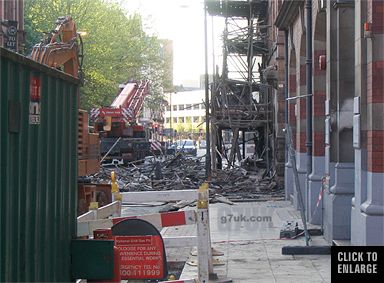 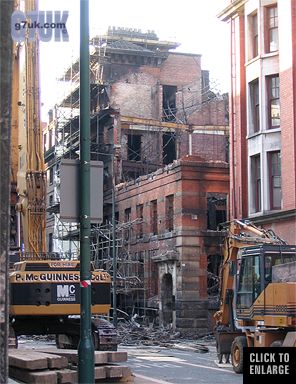 The building, under demolition. 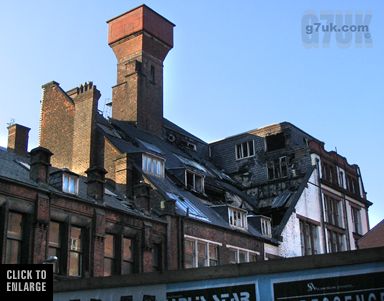 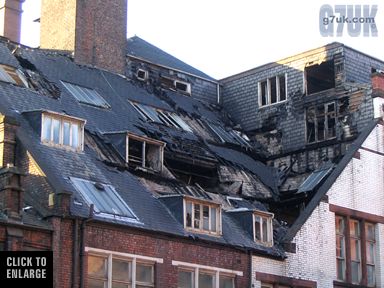 The wind blew burning embers across the street onto this roof.

And a fire that never happened: Lever Street, 1861

In June 1861, Mr Edward Williamson of the Royal Exchange Fire and Life Office was in court in Manchester, charged with obtaining money through the use of forged documents. He had created a considerable number of false insurance claims so he could pocket thousands of Pounds himself — an absolute fortune in those days when the annual wage for a skilled person, civil servant or teacher was £70 to £90 per year.

One of the claims he dreamt up was for a fire that had supposedly happened at F. Moon & Co. in Lever Street, on 22 December 1860.

UPDATE (23 May 2007): so it’s 24 days later and there has been no news of any bodies in the burnt out building. Good news but, needless to say, this hasn’t been reported in the mainstream media. There was huge worldwide coverage that suggested that the fire may have been caused by the homeless and there has been none to dispell that idea when it turns out probably not to be the case.

This is how the mainstream media works. Failure to follow up or correct false or inaccurate information, because that isn’t a juicy story. Not deliberate I’m sure, but it’s what happens.

UPDATE (17 October 2007): the damage to the building that houses the Basement Social Centre was more serious that it seemed at first. Floors and ceilings have had to be replaced. It’s hoped the Basement will be able to reopen by the end of the year.

UPDATE (24 March 2012): nearly five years on. The Basement Social Centre never did reopen and there has been nothing like it in Manchester since. A great loss.