Video footage has come to light of an intimidating passerby who tried to take away a large rainbow flag during Monday night’s Liberation 09 march.

The large shaven-headed man was with two others on Whitworth Street. I was filming the event but at that point had run up the street to record reaction shots and a wide view. My own footage (below) seems to show the three men staggering about and laughing immediately after the grab attempt. They appeared to have been drinking. 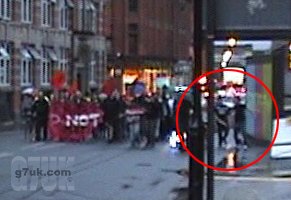 A separate camera person captured the scene moments before when the man began walking along with the parade and made two attempts to grab the pole of the flag, reaching above the head of the person who was carrying it. 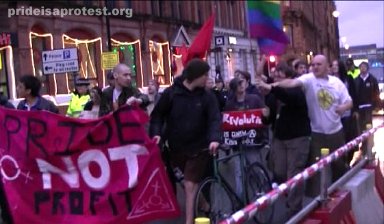 He then rejoined his two friends and they followed the marchers. As you can see, the image below has more than a hint of the playground bully about it. 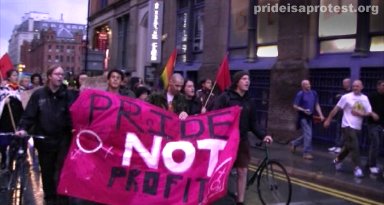 The three screen captures above appear courtesy of prideisaprotest.org

Here is the video footage of what happened. The same action is repeated three times over in this YouTube clip.

Then, quite by accident (as I hadn’t seen what had happened), I recorded them as they walked up to the barrier on Sackville Street, to be let into the fenced-off ticket-only gay village. A close examination of the video footage (some of which is in high definition) reveals that none of the three are wearing a wristband.

As they approach, the middle man takes something out of his back pocket and the other two seem to be holding something similar. My camera pans away, but then ten seconds later pans back, by which time all three have gone through the barrier and are in the village.

I slowed down the footage, showed it to a friend, and we both think that the middle man has either a staff or residents’ pass. He seems to pull it out of his back pocket by the clip. 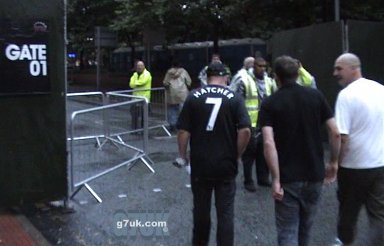 To be fair, the security people on the gate couldn’t have seen what had just happened around the corner. However, about an hour later, some of those very same ‘guards’ tried to prevent me from filming on the street and pushed my camera twice. Exactly who and what are they there to protect?

So… one of the few political events during Pride, by LGBT people, was harrassed by someone who apparently didn’t have a wristband but somehow was able to walk into the fenced off area. The kind of juvenile individual who can be see boozing across the city centre any night of the week, and then making life miserable for other people.

He was let in behind those fences that we’re told we must pay a high price for in order to protect ourselves if we want to celebrate being LGBT during ‘Pride’! Is he gay, bi, straight, staff or a resident? Watch this space as we believe more information may emerge.

Do you recognise him? If so, let us know. Manchester Pride would like to know who he is too.

Last year at the Pride parade, and on exactly the same street, a young man watching the parade tried to grab my camera and theatened me when I stood up to him. I went over to a nearby cop and explained what had happened. But it was clear that the officer didn’t want any embarrassing increase in the crime figures on that day.