As we filmed in the canal cruising area in Ancoats last Saturday afternoon, there was a rather funny moment when I had my hand up David’s shirt. Nothing untoward was going on, I was putting a tie-clip microphone on him.

But I wondered if an anguished resident might spot us and call the police to report two men interfering with each other. And one of them much older than the other — making this especially disgusting gayness from the point of view of any bigot.

I half-wish they had, as a rapid response unit screeching to a halt and some coppers jumping out would have been great for the video.

Autumn is here and it’s kind of breezy, which is bad news for sound recording. The tie-clip in question is stereo with two microphones. I clipped one to the outside of David’s shirt and the other inside it, in the hope that the fabric would provide some extra protection from the wind. The cable went down inside his shirt and that’s when it needed some help. Finally the portable Zoom H2 audio recorder went into his pocket.

In the end a little bit of wind even got into the mic under his shirt. But the result was OK.

A stereo tie-clip mic is a slightly peculiar thing because a person’s voice is inherently mono (it comes from one source) and if both mics are on the person there isn’t going to be any great separation between the left and right. Nor is it any use for picking up background atmosphere. That will be very low in level in relation to the voice and, if the person turns their back to the camera, suddenly the stereo image (such as it is) will be reversed.

So, in my opinion, the best way to use a stereo tie-clip mic is put the two mics in separate places. For instance, if you aren’t sure how loud a person’s voice will be, you might put one mic on the collar of their shirt and another further down. Then see which track turns out best.

Or, in the case of a scene with two people, one person can be fitted with the ‘left’ mic and the other with the ‘right’ (cable length permitting).

For a smoother soundtrack in some situations, get the ‘cleanest’ possible voice recording (in other words with the mic close and picking up as little background sound as possible), record the background atmosphere separately, and then combine the two at just the right levels during editing. This way you almost eliminate any sudden changes in the background atmosphere from shot to shot — something which can draw attention to edits.

I bought my tie-clip microphone online from Giant Squid Audio Labs. Pretty ridiculous that I had to import one from the United States, but I wanted a mic that would definitely work OK with the Zoom H2 and Giant Squid had tested theirs with it.

The Zoom H2 is a marvellous little recorder with just a couple of weaknesses. One of which is some slight hiss when using an external mic. But that isn’t noticeable when recording outdoors.

I’ve been using the H2 for some time now. It gets the credit for the nice sound quality at the Hazel Must Go meeting a couple of months ago. I put the recorder on the table in front of the various speakers.

Most of the broadcast TV crews didn’t bother and picked up the sound with their on-camera microphones. Not surprisingly their audio had too much echo. The exception was the cameraman from BBC Panorama, who put a wireless mic on the table.

When I interviewed Martin Bell at the same event he eyed the camera and recorder and asked ‘are those two linked in some way?’. I said not, but that thanks to the magic of digital editing it wouldn’t be a problem.

I knew what he was thinking… In the days when he was a BBC reporter, and they shot news on 16mm film, the camera and tape recorder had to be synchronised in some way. Either with a physical cable between the two, or by controlling the motors in both with ‘crystal sync‘.

Things are easier with digital (as shown above). I just load the camcorder footage into Sony Vegas, drag in the Zoom H2 audio, line up the two waveforms and then disable the camcorder audio. After several minutes the audio may have slipped out of sync with the picture by one frame. In which case I snip out a frame of audio or add one, bringing everything back into line.

WHEN I PUT WORDS IN HILDA OGDEN’S MOUTH

Twenty-five years ago, for a while after leaving university I had a dogsbody job as a ‘rubber numberer’. Which was not what you’re thinking… It was at a film editing company and syncing up sound and picture was a main task.

I ran a machine that stamped numbers on 16mm film and onto the separate 16mm magnetic soundtrack. So the two could be chopped up by a film editor, but then still matched up thanks to the stamped ‘rubber’ numbers that appeared on both every few inches. Naturally the sound and picture had to be lined up in sync before I started the machine or the whole process would be a very expensive disaster.

Much of the work was for Granada TV so it was thanks to me that Hilda Ogden’s voice matched her mouth movements in the exterior shots on Coronation Street. The film they used was reversal stock. In other words the film that had been in the camera and the one and only copy of it. This made running it on the rather Heath Robinson numbering machine all the more nail-biting!

In 1987 the show stopped using film for the exterior scenes and switched to video. By then I’d moved onto better things and so did Jean Alexander.

The Zoom H2 comes with a natty foam windshield but that doesn’t prevent anything greater than the slightest breeze. So, what to do?

Professionals use a fluffy windshield that is affectionately known as a ‘dead cat’. This fits onto the mic or it covers a metal or plastic cage and the microphone hangs inside, suspended on elastic bands. Having a void between the microphone and the cover helps to insulate the mic from the wind even more.

Commercial windshields are available for the Zoom H2 such as these ones. There’s a photo of the black Stormchaser version here.

The prices don’t seem bad at all. But I decided to make my own. Partly due to the credit crunch and because I couldn’t be bothered shipping something internationally again. But also because I thought a windshield that enclosed the whole of the H2 would look better.

The main question was, would some bog standard fur fabric (rather than special acoustic stuff) muffle the audio?

I went down to Fred Aldous the arts and crafts shop here in Manchester where I bought three strips of different-coloured long-haired fur fabric. Black, ginger and a grey and black mix (don’t let it be said that I discriminate!). On the spot I couldn’t decide which would look best.

The fur fabric is quite nasty when you cut it, as bits of fluff start floating all over the place. But once you’ve pulled away any loose hairs from the cut edges there’s no further problem and I found it wasn’t necessary to hem the edges.

My sewing skills aren’t great but I can do it because I went to a very forward-looking 1970’s comprehensive school where all the boys had to do needlework. Luckily the longhaired fur fabric hair itself hides any bad workmanship!

I can’t give you a pattern. I just laid the Zoom H2 (wearing its own foam windshield) onto the fabric, cut what I thought would be right, including a space for the screen, pinned it and then stitched it together. I put one seam across the top and one down the front. I pinched in the fabric at the base, stitched that in three places and made a strap that fastens across with Velcro. This is to stop the H2 from dropping out of the bottom and crashing to the ground if anyone should lift it by the top of the fur windshield (eek!). 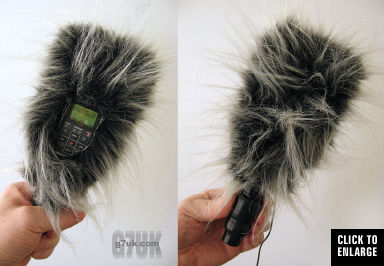 I’m not someone who’s hung up about always having ‘the’ proper item. I like to make my own solutions. But they need to look reasonably OK otherwise you lose credibility. I think this looks fine and the grey/black fur fabric mimics the professional ‘real-deal’ nicely.

But it would all be for nothing if the sound quality was adversely affected. Glad to say that so far I can hear no difference to the quality of recordings with and without the home-made ‘dead cat’ whatsoever. I’m surprised, as I thought there might be a slight loss of high frequencies.

It does seem pretty effective in cutting out wind noise. In a rather extreme test this morning I held it out from an 8th floor balcony in a breeze. The mics picked up the sound of leaves rustling on the trees below but there were only two brief rumbles of wind in a recording that lasted more than a minute. Without the new windshield it would have been constant.

The Zoom H2 comes with a number of accessories, including a plastic handle which screws into the 1/4 inch thread on the base. But being smooth and tapered I always feel as if this is going to slip out of my hand. So, using some black vinyl tape, I’ve taped a strip of spongy plastic packaging material around the handle to give a more contoured grip.

So, wind noise problems are solved when I’m holding the H2. But this still doesn’t fix the problems of wind and the tie-clip mics. I may need to make some mini furry versions for those.