I’ve been transferring my audio cassettes to digital. It’s a job I put off for a long time, as there are about 250 of them.

Those that date from 1980 onwards are played in my Tascam Porta05 Ministudio — a multitrack cassette recorder that I bought in 1988.

Tapes from the 1970’s are more tricky. It seems the inexpensive cassette recorder that I had in those days had a recording head that was misaligned. So the tapes play back with muffled sound on the Tascam.

The way around this was to adjust the head on a spare cassette deck. Many players have a hole under the cassette door for precisely this purpose.

It both cases, recording is onto my Zoom H2 recorder. 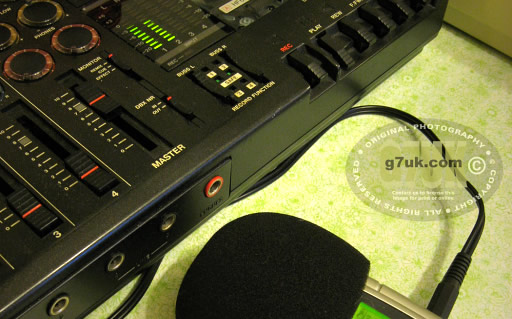 It might seem like a lot of work, but it isn’t really. As I work from home, it’s just a case of turning a tape or swapping it for another every 30 or 60 minutes throughout the day.

Only about ten are commercial cassettes. The rest I recorded myself and subject matter ranges from TV and radio programmes, to family events, home-made ‘shows’ and sound effects… The earliest recording dates from 1972 or 1973.

It may seem that recordings from TV or radio (some of them relatively poor quality) have no value. But some of these will almost certainly be the only recordings in existence of certain programmes.

To take just one example, out of five series made, the BBC Archive only holds thirty-six complete editions of Multicoloured Swap Shop. And only four from the years 1976 and 1977. The more routine shows on radio were rarely recorded at all.

I found a recording of the family singing ‘Happy Birthday’ to my grandmother in 1978. I have some silent movie film from the same event, so the two could be combined. At the time, adding sound to a film was a fiendishly complicated and expensive process. Today it’s easy, once both have been transferred to a digital format.

I was amazed to discover I had made audio atmosphere recordings for the first movie film I ever shot, of our family holiday in 1977. Again, due to the technical complications, nothing was done with the sound and the tape was forgotten about until now.

It’s an emotional experience to hear recordings of members of the family who died more than thirty years ago. Recordings that often were done very casually back then, but which now seem incredibly precious.

From more recent years there’s a full recording of the last forty-five minutes of the 1999 Manchester Mardi Gras. With Tony Wilson (who sounds a bit worse for wear) and an on-stage rant by a well-known local politician.

The files are in MP3 format. I use the free MP3DirectCut software for any editing and it does that without re-encoding the file (which would mean loss of quality). Occasionally I’m not around to swap the tape, so I end up with a long silent section at the end of the file. And some tapes are largely blank. So in both cases I can chop out unwanted chunks.

The tapes were never catalogued beyond the most basic pencil notes on the labels of a handful of them and it was never going to happen in later years when there were hundreds of cassettes and they would have to be trawled through on a cassette player. Another great thing about digital is that the recording can be seen as a waveform on screen and any point accessed immediately to hear what it is.

The cassettes from the 1970’s were almost all bought from Woolworths and are their own brand ‘Winfield Alpha Plus’. I used to buy one every Saturday. Many still have the price labels on and it’s interesting to see how expensive they were 35 years ago before manufacture was sent further ‘offshore’ to China. 49p for the most basic C60 (30 minutes each side and made in Portugal) and 89p for a C120 (60 minutes each side).

In fact today you can buy a ten-pack of TDK 90 minute tapes from Amazon for £5.38. Despite inflation over 35 years, items like this haven’t increased in cost at all. It shows how we in the West have ‘benefited’ from manufacture in countries that don’t have the same standard of living and working conditions.

If they are stored under good conditions, standard audio and videotape are thought to have an expected life of fifty years. However there are other considerations too. Will there be equipment to play them on in the future and will other parts of the cassette (rather than the tape) deteriorate? For example, audio cassettes rely on a felt pad to press the tape against the playback head. If the felt drops off or falls to bits, things become much more complicated.

If you have tapes stored away and value what’s on them, it might be a good idea to think about transferring them.