In Victorian times, the southern part of Sackville Street was called Zara Street. The road used to run right into the north-eastern part of Chorlton On Medlock and, after crossing Mount Street, was called Rutland Street.

Later, Rutland Street was renamed St. Luke’s Street. Then, in the 1960’s, the Mancunian Way (motorway) was built and sliced across the area from east to west, cutting off this part of Chorlton On Medlock from the city centre to a degree.

This is how things looked in 1916 and here is a photo taken from the same spot this month. 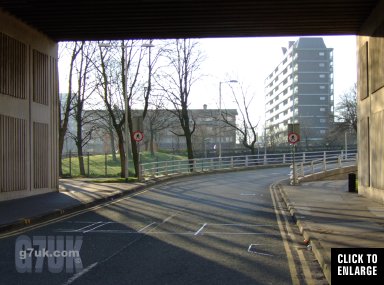 This map is from 1849. The yellow symbol shows roughly where the camera was in both photographs, old and new, and the red lines show where the Mancunian Way runs today.

Here’s a shot from 1916 looking in the opposite direction up Sackville Street. On either side in the foreground are the low walls of the bridge over the River Medlock. On the map above it is shown as the ‘Zara Street Bridge’.

See the area on Google Maps.

Chorlton On Medlock (or Chorlton UPON Medlock) covers a fairly large area from Stockport Road in the east, Hathersage Road in the south, Cambridge Street in the west and almost into the city centre in the north. Just to confuse matters, the north eastern part is sometimes referred to as Brunswick. In the nineteenth century this north-eastern area near Sackville Street had a mix of factories, mills, chemical and dye works and poor terraced housing, along with some grand houses along the front of some of the streets. As the century progressed and the area became ever more industrialised, the wealthier people moved further out of the city, leaving the poor behind.

The air was thick with smoke and filth. There were outbreaks of cholera, especially amongst the houses that bordered the River Medlock (this photo was taken from Downing Street looking west). Nowadays you may be lucky enough to see a heron in the river, but 150 years ago it was a toxic soup of chemicals, sewerage and other waste. It wasn’t uncommon to find dozens of families sharing a single outside toilet or cold water tap.

When you weren’t at your 84-hours-a-week job in a factory or at one of the ‘dark satanic mills’ you might be at one of the many churches in the area. Such as St.Luke’s.

Grosvenor Street was a focal point for religion, with a number of churches and chapels, the Salvation Army and a “Funeral Furnisher” on the corner with Downing Street. The business can be seen here in 1890 and was still there in 1958 with the same family name (Broome).

Here’s a shot of St. Luke’s church from 1957 and another from 1959, by which time many of the houses had been demolished. The photographer had his back to Downing Street when he took these two photos.

You can see the church on the 1849 map. However it seems this was an earlier building and it was rebuilt with the spire shortly after that date. 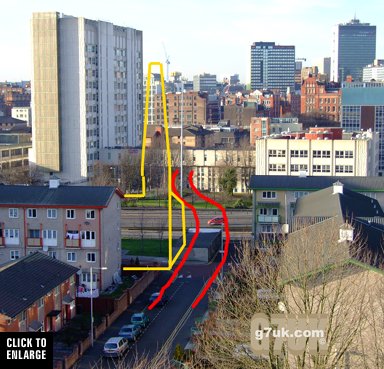 In the modern-day photo above the approximate positions of Sackville Street and St Luke’s Church are marked in red and yellow. Note the patch of grass next to the Mancunian Way, which is where the graveyard of St Luke’s was.

Here’s a shot from 1960 looking towards the city centre and similar to the modern day picture above. However the camera position is a little further to the left. You can see the rear of St Luke’s and its spire on the right of the photo.

Note the distinctive red brick Manchester University building at the top right corner of the modern shot and top left of the archive shot. This photo was taken at the same time (the vehicles are the same in both) and shows the tower of Piccadilly Plaza (now called City Tower) under construction in the distance. Here’s another image showing the scene slightly further to the left (west).

The information on one of these pictures states that they were taken from the roof of 68 Grosvenor Street, which I think may be this building. It’s in the right position and one of the few that is still there now, although boarded up and neglected. Here’s how it looks today: 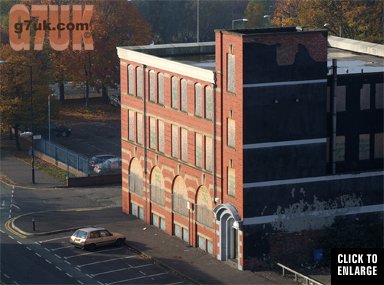 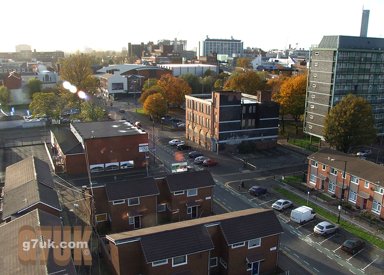 Here’s a shot looking east towards Downing Street and Piccadilly Station. Note the spire of St Luke’s in the foreground and the box shaped building in the middle distance on the right side of the picture. This is an electricity sub-station apparently and is right next to the entrance to Manchester’s one-time top-secret cold-war atom bomb shelter: the Guardian tunnel.

And it seems the photographer turned to his right slightly and got this shot which shows the rear of the buildings along Grosvenor Street.

Note the factory with the zigzag roof in the top middle of the photo. Here it is today from a different camera angle. 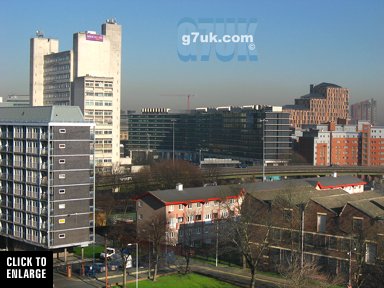 Looking over to the west from the same roof, this vintage shot shows Upper Brook Street with the junction with Grosvenor Street just out of frame to the left. This is how that junction looked in 1959 (the vans at the traffic lights are travelling towards the west along Grosvenor Street). Here’s how the same scene looks today: 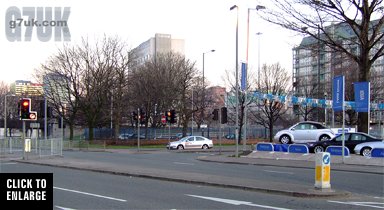 This image shows those buildings under demolition in 1960. However the photographer has printed the negative the wrong way round (or it has been scanned that way) so the scene is flipped horizontally.

And here’s the other side of the junction in 1959. The road leading away from the camera is Upper Brook Street heading towards the city centre. In the similar modern-day view below you can see the same building at far left of frame.

If you look at the chimneys you can see how many buildings were demolished to widen Upper Brook Street: the buildings on the corner at the junction, the lower white building and the taller darker building to the left of it were all pulled down. With only the one to the very far left of the old photo still remaining today.

Road widening was one of the things that contributed to the destruction of communities up and down the country, as whole stretches of shops were swept away. 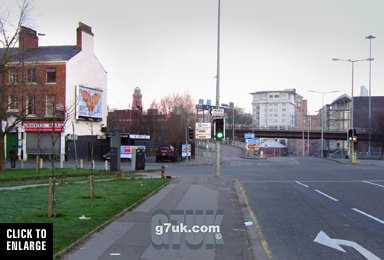 According to a note on one of the photos in the Manchester Libraries collection, when he was in Manchester Charles Dickens used to attend a smaller chapel that was just behind the Rusholme Road Congregational Chapel. The latter stood on the corner of Upper Brook Street and Rusholme Road. Here is a similar image that gives more of a glimpse along Rusholme Road and here is the modern day scene.

The Chapel was where the red-brick house (gable end) is today on the left side of the photo and extended up to where the lamp-post is.

Upper Brook Street is now much wider than it was in those days and Rusholme Road disappeared completely in the 1960’s, along with almost everything else in this part of Chorlton On Medlock. They called it ‘slum clearance’ and much of the housing that was bulldozed was poor. But decent buildings were swept away too.

Similar houses survived in other areas. If they were still around, some of those large terraced houses would sell for £250,000 now (examples: 1, 2, 3, 4). But, even if they had survived the clearance, some of them would no doubt have fallen into dereliction or even been abandoned completely in the following years, as happened in other areas of Manchester during that time.

Today this inner-city area still has a good sense of community. It’s home to an incredibly diverse range of different cultures and nationalities and all get along well together. Here’s a colourful ‘flags of the world’ parade by local children from 2006:

This page is mainly about the area of Chorlton On Medlock to the west of Oxford Road.