As the running costs of Manchester Pride continue to spiral out of control, it has emerged that anyone buying an ‘early bird’ ticket this year will pay £12.50. A 25% increase on last year’s price of £10. 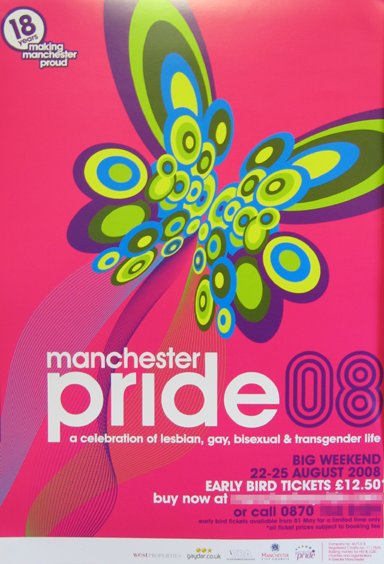 On the site this is presented as if it is an inevitable fact of life. In truth it comes down to how the organisers (mis)manage the money. Ask yourself how much your income increased in that same three year period. Inflation probably averaged out at 3% a year.

Back in 2000, everyone was able to enjoy GayFest for free and it raised £105,212 for good causes. Allowing for inflation over seven years, that sum is equivalent to about £126,000 in todays money.

Meanwhile, the charity amount has fallen:

In 1994/95 the Village Charity was able to give out grants totalling more than £60,000, with the free August Bank Holiday event as its biggest fundraiser.

How much longer will Manchester’s LGBT community allow this to continue?

To end on a more positive note, at least the words ‘Lesbian, Gay, Bisexual and Transgender’ have been restored to this year’s poster after disappearing in 2007.

*** As you can see above, we don’t have many figures from before 1999. If you have any press clippings from earlier years, showing amounts raised and costs, we would love to have a copy. Contact us here.