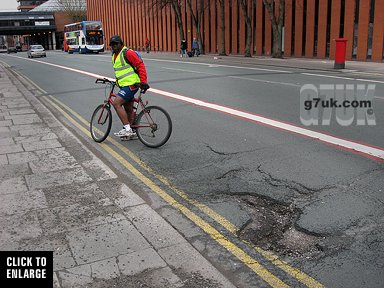 Oxford Road in Manchester is reputed to be the busiest bus route in Europe. Since the severe winter, the surface of the road has cracked open into a large number of potholes as never before.

Cyclists share lanes with buses and although in my experience the bus drivers are usually considerate, some of these holes and bumps are huge, making them difficult to avoid.

One hole I came across just after the last load of snow was about 18 inches in diameter and 5 inches deep with straight sides. Luckily it was patched up within a day (though in a very temporary way).

Potholes happen when water fills cracks in the road surface and then it freezes. But the real question is why the roads were in such a poor state in the first place?

Over the last ten years the population of the city centre has increased massively, generating more council tax for the city council. Plus we’ve had a boom which again has meant more income — from businesses. So what has the money been spent on? It doesn’t help that Manchester City Council feels able to just write off a £420,000 ‘accounting error’.

How is it that roads and parks and many public places were in a better state in the austerity years after World War Two when Britain was almost bankrupt? Of course there is much more traffic now but some of the public parks are a disgrace compared to how they looked up until the 1960’s. Have local councils been frittering away our money on the ‘wrong’ things (executive pay, international festivals and attracting tourists) while neglecting their basic core responsibilities? Having wasted it during the good times what is going to happen in the next five to ten years when there will be far less money around?

Chanel 4 News is making a pothole map of Britain and reports there has been a 50% rise in the number of holes, with it destined to become an issue in the forthcoming local elections.